The key to long-term cockroach control is the elimination of food, water and harborage sources needed to survive.

Roaches evolved as scavengers of dead plant material and prefer carbohydrates to protein and fat as a result. They will, however, eat almost anything when hungry, such as starch-based paints, wallpaper paste, envelope glue and bar soaps, which all contain carbohydrates. Infestations often occur when roach egg cases are accidentally introduced in shipped materials, groceries, beer and soft-drink cases and used appliances, rugs and furniture.

Roaches have amazing migratory abilities. They can travel up elevator shafts and drains, through heating and air vents,, tiny cracks and crevices in walls and above false ceilings. They commonly radiate out from areas that provide a steady food source, such as kitchens, pantries, restaurants, cafeterias, and garbage collection or disposal areas. When the weather is warm enough, they can migrate between structures outdoors along the outsides of buildings and from dumpsters to nearby living units.

The Australian roach is more vegetarian than other species, and may be found in greenhouses. The American roach enjoys moisture and life on the seas — it is common on ships, as well as in basements and sewers. The smokybrown roach also can be found in sewers, but primarily lives outdoors. Oriental roaches are also moisture lovers, while the brownbanded roaches prefer warm, dry environments, such as closet shelves and the upper stories of houses.

German roaches have the widest distribution of all domestic roaches and are often found in dead leaves and garbage piles, but also readily invade cartons, sacks and containers, and will enter empty or open bottles. They invade the indoors from outdoor habitats in the summer only, and are usually found in basements and of first floors, having a preference for the warm area around furnaces and heating ducts. This is the most common roach to be seen in food preparation areas in restaurants, cafeterias and kitchens – environments where the combination of food, moisture and warm temperatures mimic that of their native East Africa.

This roach prefers squeezing into small cracks where their backs and undersides make contact with other surfaces. They are often found backed into cracks with their antennae and heads sticking out, picking up chemical signals from the air, which their behavior is more dependent upon than vision or sound. They become more active 20 minutes to 2 hours before dark, and increase their activity to a peak ending before daybreak. Only when populations are very high will they be active during daylight. 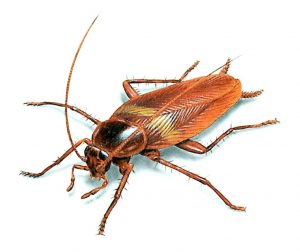